We Need the Creeds 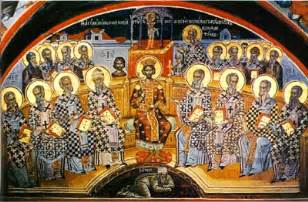 The Purpose and Necessity for the Creeds

One doesn't have to go far to see the confusion the world has in regard to what a Christian believes. Social media and newsroom scandal have left our culture with tremendous distrust for organization. I have heard debate against the validity and content of Scripture. Declining church attendance in our communities bear witness to the common disdain for piety. The prospect of affirming any particular creed is swallowed up by our individualistic claims that, "My god doesn't do that." To refute these individually, is like cutting the ropes of a trapeze and leaving no safety net. The acrobat is doomed to find another heresy to which to cling or fall to his death. This is the work of the Creeds. Amidst diverse heresy the early church found unity in the ministry of Christ and affirmed it with collective adherence to a creed.

The culprits of the day were Marcion and Gnosticism. In these, various attempts were made to explain away the intricate relationship between the material world and the divine.[1] They would go to such lengths as publishing their own gospels (never claiming them to be one with Scripture), and rewriting scripture to fit their beliefs.[2]  The heresy is too deep and widespread to divulge hear or refute individually. Finally, the church would holistically respond.

Christianity at large needed to distinguish what writings would be authoritative, thus the Canon was recognized. They would need to establish its validity, affirming its direct link to the Apostles and their teaching. At last they would refute heretical thought, such as denying the Trinity, and make public profession of all of the above; this came in the form of the Creeds.[3]  The Apostles' Creed would serve to confirm or refute the belief of those traveling believers along the Roman roads.[4] Early catechumens, candidates for baptism, would answer in the affirmative when asked publicly if they believed in each article of the Creed. This would preserve the doctrine of the Church and become foundational of the adherent's faith.

Today, we have the opportunity to enjoy the work of such diligent refuters of poor doctrine. Our ability to worship God in undistorted faithfulness to Scripture comes as a result. However, it seems our failure to continue reverence for these creeds of the early church may indeed result in an undoing of the protection they afforded. If you are one who struggles with the diversity of the many Truth claims of our day, find solace in this Creed. Resolve comes not in personalized belief but in the unity of the Gospel for all people.

What are You Eating? Four Kinds of Spiritual Food

Why Won't They Listen?